Aristotle: Wisdom Starts with Understanding Yourself 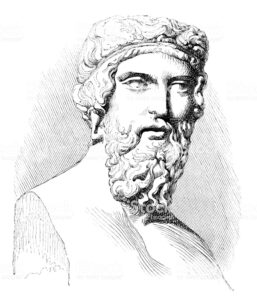 Aristotle was born around 384 B.C. Though little is known about his mother, Aristotle’s father was court physician to the Macedonian king Amyntas II (the connection and affiliation with the Macedonian court would continue to play an important role throughout Aristotle’s life). Both of Aristotle’s parents died when he was young, and at the age of seventeen, Aristotle’s guardian sent him to Athens to pursue a higher education. It was in Athens that Aristotle would enroll in Plato’s Academy and study under Plato. He would remain there for the next twenty years, studying with Plato as both a student and colleague.

When Plato died in 347 B.C., many believed Aristotle would take his place as director of the Academy. However, by that time, Aristotle had differing views on several of Plato’s works (for example, he disagreed with Plato’s theory of Forms), and Aristotle was not offered the position.

With the death of Alexander the Great in 323 B.C., the government was overthrown and anti-Macedonian sentiment was high. Facing charges of impiety, Aristotle fled Athens to avoid being prosecuted and remained on the island of Euboea until his death in 322 b.c.