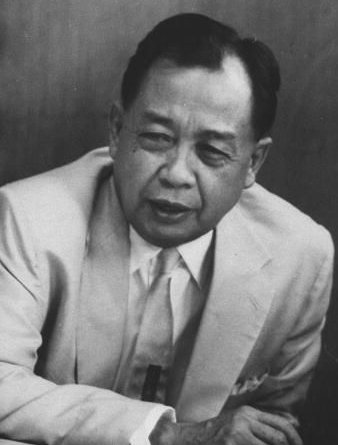 What are the basic components of nationalism? One is the growing and deepening consciousness that we are a distinct people with our own character and spirit, our own customs and traditions, our own ideals, our own way of thinking, our own way of life. What sets us apart as a people distinct from any other are the experiences and vicissitudes we have gone through together as a nation in our own environment. A Filipino cannot assert this identity and call himself a nationalist unless he is one with his people’s history and has enshrined in his heart the precepts and examples of our heroes and martyrs.

A firm belief in the genius of our race and in the capacity of the people for advancement toward the attainment of their destiny is another basic component of nationalism. But this belief can be acquired only through an understanding of their struggles and accomplishments, their trials and tribulations, the sum total of their experiences since the dawn of their history.

If, according to Webster, “nationalism” and “patriotism” are synonymous, then, to be a patriot is to be a nationalist, and vice versa. It is for this reason that I do not believe in qualifying “nationalism” with such restrictive adjectives as “positive and “balanced.” To dilute nationalism thus would be like emasculating “patriotism.”

We, the nationalists of today, are fortunate that we can profit from our own past and the unforgettable example of heroism, self-sacrifice, tenacity, and courage, in the face of tremendous odds, of our people and their nationalist leaders in the finest hour of our history.

Nationalism is nourished by a sense of history. It is of its essence to know profoundly the past, so that we may be in complete oneness with the men who made that history and in intimate communion with their thoughts, their deeds, and their noble lives. The study of our nation’s history with its nationalistic tenet is, therefore, an inescapable duty and necessity in this formative period of our Republic.

The battle-cry that animates and sets in motion millions of hearts and minds is nationalism. It is not a passing emotion, not a naïve longing for the trappings of sovereignty. It is persevering, militant, and mature. Its militancy is evident in its determination to correct the wrongs of the past, to effect changes that shall place the political, economic, and cultural life of peoples under their own forging and control. It connotes perseverance because it is consubstantial and, as such, coeval with country and people. Its maturity may be perceived in its refusal to accept form for substance, illusion for reality.

Nationalism is the natural antagonist of colonialism. Nations that are still ruled by imperial powers are rallying behind nationalist leaders to secure their independence. Nations, like Indonesia and the Philippines, that have succeeded in regaining their political independence must still rely on the nationalist spirit in their struggle against colonialism. For the independence of countries such as ours cannot be complete until the last traces of colonialism have been eradicated. The demarcation line between what is constructively nationalistic and what is discriminatingly chauvinistic is often very thin and delicate.

The demarcation line, on the other hand, between what is a broad concept of nationalism and what is expedient internationalism can be thin and delicate too. At its worst then, extreme nationalism can be a narrow view of country and people such that the viewer intentionally refuses to see defects, however blatant they are, while seeing only, magnified and exaggerated sometimes, the good points. The result of such a view is that progress has to be necessarily slow—it can, indeed, even produce stagnation. At its best, nationalism would mean a calm and mellow appraisal of the various aspects of one’s country, its excellence and its failings; where it is strong; where it is not so strong and therefore needs reinforcement; where it is weak and therefore needs fortifying. That kind of nationalism is not afraid to face censure as it is not timid to accept praise, the clear-sighted kind which, in Churchill’s definition, bravely criticizes country and people when at home, but desists from destructive criticism when away from home. It is a necessary step towards the best in inter-nationalism which in turn is a broad, generous, and unified view of peoples and countries, unwrapped by inhibiting prejudices and discriminations and ramparted by understanding, tolerance, and sympathy.

In the political as well as in the other phases of a nation’s life, these two attributes complement one another in ideal circumstances, internationalism being, as it were, an enlightened ex-tension of nationalism. Thus, when we say that the Filipinos should patronize their own in the economic, political, social, and cultural fields, it does not mean the exclusion of their neighbors. It merely means a self-cultivation which translates itself into self-dependence and consequent self-respect. Expanding the idea would be expressing regional self-cultivation, self-dependence, and self-respect. The terms do not overlap nor are they inimical; they constitute a continuing idea, or ideal, of growth and development in the concept of country, region, and the world, to produce in the minds and hearts of people, world attitudes, which have the right values.

It is evident that our brand of nationalism is different from that of our accusers. We have no desire and we have never attempted to deny the national self-interest of other peoples in their own countries. We merely want to defend our own, in our own territory. We are nationalists but we can live in harmony with other nationalists, because all nationalisms can work out a plan for co-existence which will not detract from the sovereignty of any one nation. Those who are bent on carrying their nationalism beyond their national frontiers in order to overrun other nationalisms have ceased to be true nationalists and have become ultra-nationalists, which is another word for imperialists. “Ultra” is a Latin word which means beyond in space, as in the terms “plus ultra” and “non plus ultra.” An ultranationalist, therefore, is one who wants to be first not only in his own country, but also in other countries to which he is a foreigner; that is, an imperialist.