Two of the episodes in this story are taken from the earliest poets. Hesiod in the eighth or ninth century tells about the Chimaera, and Anteia’s love and the sad end of Bellerophon are in the Iliad. The rest of the story is told first and best by Pindar in the first half of the fifth century.

In Ephyre, the city later called Corinth, Glaucus was King. He was the son of Sisyphus who in Hades must forever try to roll a stone uphill because he once betrayed a secret of Zeus. Glaucus, too, drew down on himself the displeasure of heaven. He was a great horseman and he fed his horses human flesh to make them fierce in battle. Such monstrous deeds always angered the gods and they served him as he had served others. He was thrown from his chariot and his horses tore him to pieces and devoured him. 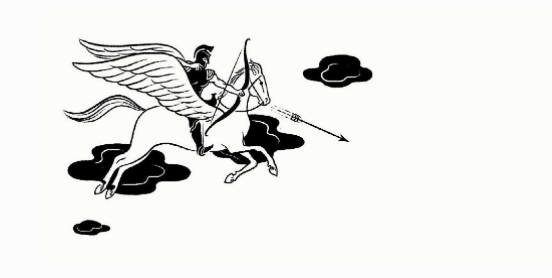 In the city a bold and beautiful young man named Bellerophon was generally held to be his son. It was rumored, however, that Bellerophon had a mightier father, Poseidon himself, the Ruler of the Sea, and the youth’s surpassing gifts of spirit and body made this account of his birth seem likely. Moreover, his mother, Eurynome, although a mortal, had been taught by Athena until in wit and wisdom she was the peer of the gods. It was only to be expected on all scores that Bellerophon should seem less mortal than divine. Great adventures would call to such a one as he and no peril would ever hold him back. And yet the deed for which he is best known needed no courage at all, no effort, even. Indeed, it proved that

What man would swear cannot be done—
Must not be hoped for—the great Power on high
Can give into his hand, in easy mastery.

More than anything on earth Bellerophon wanted Pegasus, a marvelous horse which had sprung from the Gorgon’s blood when Perseus killed her (see Part Three, Chapter I). He was

A winged steed, unwearying of flight,
Sweeping through air swift as a gale of wind.

Wonders attended him. The spring beloved of poets, Hippocrene, on Helicon, the Muses’ mountain, had sprung up where his hoof had struck the earth. Who could catch and tame such a creature? Bellerophon suffered from hopeless longing.

The wise seer of Ephyre (Corinth), Polyidus, to whom he told his desperate desire, advised him to go to Athena’s temple and sleep there. The gods often spoke to men in their dreams. So Bellerophon went to the holy place and when he was lying deep in slumber beside the altar he seemed to see the goddess standing before him with some golden thing in her hand. She said to him, “Asleep? Nay, wake. Here is what will charm the steed you covet.” He sprang to his feet. No goddess was there, but a marvelous object lay in front of him, a bridle all of gold, such as never had been seen before. Hopeful at last with it in his hand, he hurried out to the fields to find Pegasus. He caught sight of him, drinking from the far-famed spring of Corinth, Pirene; and he drew gently near. The horse looked at him tranquilly, neither startled nor afraid, and suffered himself to be bridled without the least trouble. Athena’s charm had worked. Bellerophon was master of the glorious creature.

In his full suit of bronze armor he leaped upon his back and put him through his paces, the horse seeming to delight in the sport as much as he himself. Now he was lord of the air, flying wherever he would, envied of all. As matters turned out, Pegasus was not only a joy, but a help in time of need as well, for hard trials lay before Bellerophon.

He did not care to do so, for the same reason that had made Proteus unwilling: Zeus’s well-known hostility to those who broke the bond between host and guest. There could be no objection, however, to sending the stranger on an adventure, him and his winged horse. So he asked him to go and slay the Chimaera, feeling quite assured that he would never come back. The Chimaera was held to be unconquerable. She was a most singular portent, a lion in front, a serpent behind, a goat in between—

A fearful creature, great and swift of foot and strong,
Whose breath was flame unquenchable.

But for Bellerophon riding Pegasus there was no need to come anywhere near the flaming monster. He soared up over her and shot her with his arrows at no risk to himself.

When he went back to Proteus, the latter had to think out other ways of disposing of him. He got him to go on an expedition, against the Solymi, mighty warriors; and then when Bellerophon had succeeded in conquering these, on another against the Amazons, where he did equally well. Finally Proteus was won over by his courage and his good fortune, too; he became friends with him and gave him his daughter to marry.

He lived happily thus for a long time; then he made the gods angry. His eager ambition along with his great success led him to think “thoughts too great for man,” the thing of all others the gods objected to. He tried to ride Pegasus up to Olympus. He believed he could take his place there with the immortals. The horse was wiser. He would not try the flight, and he threw his rider. Thereafter Bellerophon, hated of the gods, wandered alone, devouring his own soul and avoiding the paths of men until he died.

Pegasus found shelter in the heavenly stalls of Olympus where the steeds of Zeus were cared for. Of them all he was foremost, as was proved by the extraordinary fact that poets report, that when Zeus wished to use his thunderbolt, it was Pegasus who brought the thunder and lightning to him.