This story is told only by Ovid and the Goddess of Love is therefore Venus. It is an excellent example of Ovid’s way of dressing up a myth, for which see the Introduction.

A gifted young sculptor of Cyprus, named Pygmalion, was a woman-hater.

Detesting the faults beyond measure which nature
has given to women,

he resolved never to marry. His art, he told himself, was enough for him. Nevertheless, the statue he made and devoted all his genius to was that of a woman. Either he could not dismiss what he so disapproved of from his mind as easily as from his life, or else he was bent on forming a perfect woman and showing men the deficiencies of the kind they had to put up with.

However that was, he labored long and devotedly on the statue and produced a most exquisite work of art. But lovely as it was he could not rest content. He kept on working at it and daily under his skillful fingers it grew more beautiful. No woman ever born, no statue ever made, could approach it. When nothing could be added to its perfections, a strange fate had befallen its creator: he had fallen in love, deeply, passionately in love, with the thing he had made. It must be said in explanation that the statue did not look like a statue; no one would have thought it was ivory or stone, but warm human flesh, motionless for a moment only. Such was the wondrous power of this disdainful young man. The supreme achievement of art was his, the art of concealing art.

But from that time on, the sex he scorned had their revenge. No hopeless lover of a living maiden was ever so desperately unhappy as Pygmalion. He kissed those enticing lips—they could not kiss him back; he caressed her hands, her face—they were unresponsive; he took her in his arms—she remained a cold and passive form. For a time he tried to pretend, as children do with their toys. He would dress her in rich robes, trying the effect of one delicate or glowing color after another, and imagine she was pleased. He would bring her the gifts real maidens love, little birds and gay flowers and the shining tears of amber Phaëthon’s sisters weep, and then dream that she thanked him with eager affection. He put her to bed at night, and tucked her in all soft and warm, as little girls do their dolls. But he was not a child; he could not keep on pretending. In the end he gave up. He loved a lifeless thing and he was utterly and hopelessly wretched.

This singular passion did not long remain concealed from the Goddess of Passionate Love. Venus was interested in something that seldom came her way, a new kind of lover, and she determined to help a young man who could be enamored and yet original.
The feast day of Venus was, of course, especially honored in Cyprus, the island which first received the goddess after she rose from the foam. Snow-white heifers whose horns had been gilded were offered in numbers to her; the heavenly odor of incense was spread through the island from her many altars; crowds thronged her temples; not an unhappy lover but was there with his gift, praying that his love might turn kind. There too, of course, was Pygmalion. He dared to ask the goddess only that he might find a maiden like his statue, but Venus knew what he really wanted and as a sign that she favored his prayer the flame on the altar he stood before leaped up three times, blazing into the air. 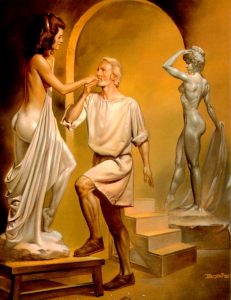 Very thoughtful at this good omen Pygmalion sought his house and his love, the thing he had created and given his heart to. There she stood on her pedestal, entrancingly beautiful. He caressed her and then he started back. Was it self-deception or did she really feel warm to his touch? He kissed her lips, a long lingering kiss, and felt them grow soft beneath his. He touched her arms, her shoulders; their hardness vanished. It was like watching wax soften in the sun. He clasped her wrist; blood was pulsing there. Venus, he thought. This is the goddess’s doing. And with unutterable gratitude and joy he put his arms around his love and saw her smile into his eyes and blush.

Venus herself graced their marriage with her presence, but what happened after that we do not know, except that Pygmalion named the maiden Galatea, and that their son, Paphos, gave his name to Venus’ favorite city.