Stanley Milgram is perhaps most well-known for his famous, yet extremely controversial, experiment on obedience. Milgram was fascinated by the effect that authority had on obedience, and believed that people would nearly always obey orders out of a desire to seem cooperative or out of fear, even if this meant going against their better judgment or desires.

Milgram began his obedience experiment in 1961. Shortly before, the world had been captivated by the trial of Nazi war criminal Adolf Eichmann, who, among other things, was charged with ordering the deaths of millions of Jews. Eichmann’s defense in the case was that he was just following instructions.

Milgram conducted the experiment at Yale University, where he recruited forty men through newspaper ads. The participants were informed (falsely) that the study they were joining was focused on memory and learning. They were told that one person would take on the role of teacher and the other would take on the role of student, and that these roles would be chosen randomly. Each participant drew a supposedly random slip of paper. In reality, however, all of the papers said “teacher” on them. The only “students” were actor accomplices of Milgram’s. Thus, all of the unknowing participants were intentionally given the role of the teacher, while believing it to be a random assignment. 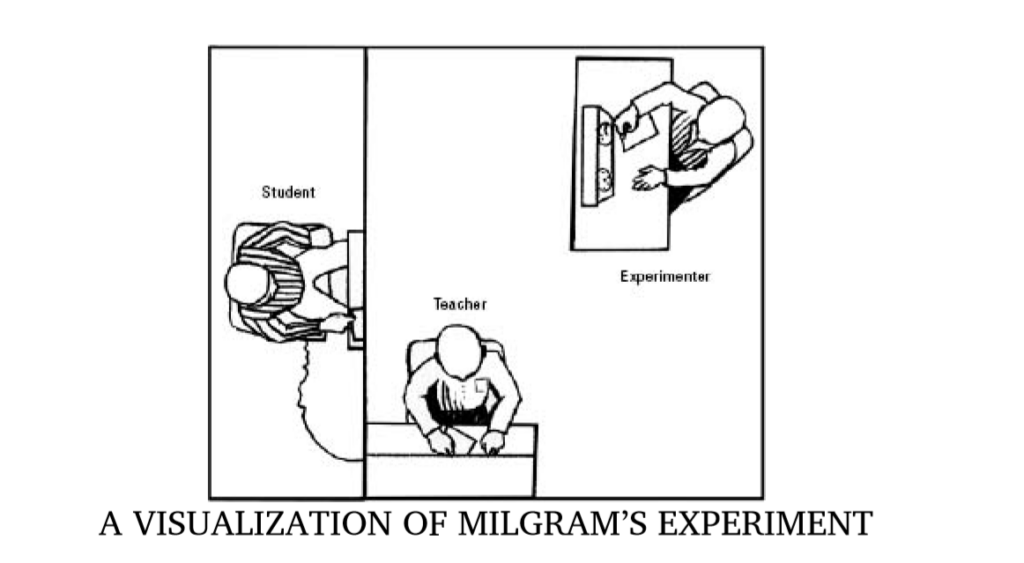 Each participant “teacher” is paired with one of the accomplice “students.” The teacher watches as the student is strapped to a chair and has electrodes attached to him by laboratory assistants.

The experiment ends when the highest level on the shock generator is reached.

Milgram asked a group of Yale students to predict how many people they thought would administer the maximum shock level, and they estimated three out of 100 people would do it. Surprisingly, Milgram found that 65 percent of the participants in his study administered shock levels of 450 volts! While people did show signs of internal struggle through groaning, nervous laughter, and trembling, most of them obeyed the experimenter’s request to continue with the experiment. When interviewed after the experiment, Milgram asked the participants to rate how painful they believed the shocks actually were, and “extremely painful” was the typical answer. Milgram even found that the participants—in an effort to justify their behavior—devalued the student during the experiment, saying the student was so dumb that he actually deserved the shock. Milgram was able to successfully show that under certain circumstances, everyday people who are considered “normal” have the capability to cause intense pain and suffering. Milgram was able to explain such high levels of obedience in the following ways:

Milgram’s obedience study drew fierce criticism regarding its ethical procedure. The subjects involved in the study were led to believe that they were causing pain to another person when, in reality, they were being duped by an actor pretending to be in pain. The experiment caused great stress to the subjects, and the fact that they believed they were hurting a complete stranger could have traumatized them.