The Concept of Identity and How it Affects Communication Across Cultures

It is essential to understand the concept of identity to understand how it affects communication across cultures. Every individual has multiple identities which each one displays depending on the context. For instance, at school you demonstrate your identity as a student, but your actions are also influenced by your gender, your age, your nationality, and your religious beliefs. You may emphasize your religious identity in the context where you are asked to lead the prayer before the class begins. The following are some of the social and cultural identities that influence how people think, behave, and interact with others.

This pertains to how one culture assigns different social roles to men and women. Stella Ting-Toomey (2005) defined gender identity as “the meanings and interpretations we hold concerning our self-images and expected other-images of ‘femaleness’ and ‘maleness.— For instance, some cultures impose rules on clothing (e.g., pink clothes for a newborn female and blue for male), language (e.g., In Japan, some words can only be used by females), behavior (e.g., ways of sitting), and roles in society (e.g., hunting versus weaving; working versus looking after the children) for each gender. In some cultures, men and women have equal opportunities in the workplace, in the academe, and may have similar roles in the family.

Researchers have claimed that men and women differ in the way they speak (in Adler & Rodman, 2006). For instance, in terms of content, it has been observed that women talk more constantly about personal and domestic matters, topics about family, weight, problems in relationships and health, food, and clothing. On the other hand, they found out that men tend to talk more about sports, business, current events, music, and were less likely to gossip about friends and family members as compared to women. In terms of their goals for communicating, women communicate to build and nurture relationships; while men tend to communicate to accomplish a goal or finish a task. The language of men therefore tends to be more direct, competitive, aggressive, and controlling while the language of women tends to be more sympathetic, tentative, and emotional. Let’s consider this situation:

This involves behaving in a particular manner expected of one’s age. In Korea, younger people speak differently to their elders by using honorifics. In the same way, younger people in the Tagalog region use “po”and “opo.” Age identity also determines how one may present himself or herself in terms of appearance, clothing, and activities. Take this example:

Because of their close relationship, Lisa’s mother talks to her as if they were of the same age group. Lisa’s friends envy her because, unlike them, Lisa can talk to her mother about anything. However, the parents of Lisa’s friends think otherwise. They think Lisa’s mother cannot command respect from her children by using this kind of language. 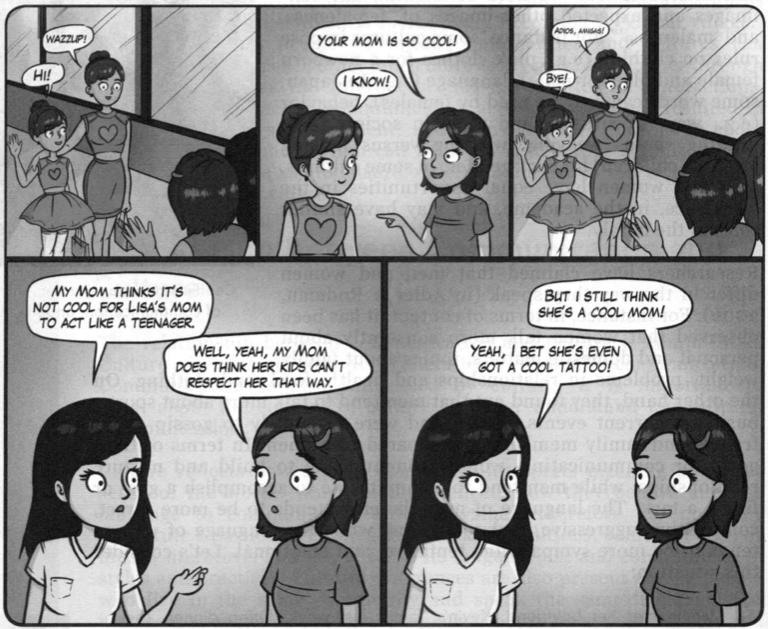 This is defined by one’s social or economic status. People of different backgrounds differ in terms of lifestyles, and may be illustrated by which clothes they wear or what kinds of food they eat. Class identity may be inherited or attained. In some societies, for instance, education determines social status and thus, receiving a college education may result in a change in one’s identity. Research (Knowles, 2016; Kraus & Keltner, 2009) shows that social class affects how one interacts towards people. Those who have higher economic status tend to pay little attention to people who are not as wealthy or relevant in society. Daniel Goleman (2013) states that people belonging to a higher class are more likely to show disregard through facial expressions and are more likely to interrupt someone from the lower class. He explains that “poor people are better attuned to interpersonal relations—with those of the same strata, and the more powerful—than the rich are, because they have to be.” On the other hand, the rich can afford to hire help without relying on interpersonal relationships.

This influences how one behaves (ethics, moral standards) and what one believes. The cause of some intercultural conflicts is religion, such as when one imposes one’s religious beliefs on someone who does not share the same beliefs. One’s religious identity may also be related to one’s racial or national identity, and influence one’s gender identity. Some people may feel uncomfortable communicating with someone who holds a different religious belief. In worse cases, the lack of respect towards another religion may result in physical violence and intercultural conflicts. One such example is the thirteen-minute video uploaded on YouTube entitled “Innocence of Muslims.” The film’s offensive depiction of Islam and the blasphemous portrayal of the Prophet Mohammed as a pedophile, homosexual, and murderer encouraged violent anti-American street protests in Egypt and Libya in 2012.

This refers to one’s national citizenship or legal status in a country or nation. National identity is different from racial and ethnic identity. Filipino immigrants to the United States, for instance, may have to reflect on their new national identity in order to adjust and fit in. People define and think of their national identities in different ways. Consider the following example:

What is Japanese national identity? I have to say that many things are in the very psyche, the Japanese psyche. They are more than feelings–the way you feel when the spring is around and see cherry blossoms everywhere. You become grateful to the cycle of nature and the promise that spring always comes. Such a feeling that you believe that you share with others, as people talk about it, is a big part of national identity, I think. It is also in big sport events, where you can feel one with others by sharing emotions. It is in the fixation to the food, the meticulous attention and kodawari (fixation) about food. And it is felt in many folk songs (douyou), which sing a lot about nature, living creatures, etc. In sum, there are so many things about Japanese national identity. But, to me, they are never about the national flag or pledging allegiance to your country. —Tamie