The Formation of Self-Concept

One’s self-concept is not innate. It develops through interaction and communication with other people. It is through intrapersonal communication that we accept or reject the perspectives of other people which eventually define who we are. Notice how your self-concept has changed through the years. This is because the self is constantly changing and is influenced by people’s expectations of, and behavior towards us. When we accept and internalize other people’s perspectives of us, we create self-fulfilling prophecies, that is, we perceive ourselves the way others perceive us and act according to this perspective.

Lillian’s high school teacher told her that she’s not good in mathematics and that she will never be an engineer—her ultimate dream—because of this. She internalized this and did poorly in all her math classes all through high school. When she was in college, a professor told her that anyone can learn math. Because the professor believed in her, Lillian strived to meet his expectations and improved in the subject.

Our self-concept does not only depend on our interaction with people who are close to us such as our family members, teachers, and friends. It is also influenced by the rules, cultural values, and expectations of our society. The information promulgated by mass media or educational institutions contributes to how we view ourselves, how we are supposed to behave, and what roles are expected of us as members of the society.

The following are some of the factors that contribute to the development of the self.

Direct definition is giving labels to an individual’s personality or behavior. How parents describe their children (e.g., sweet, thoughtful, incorrigible, mature, stupid) affect their self-esteem depending on whether or not the labels given are positive or negative. These definitions guide them in determining who they are, what is expected of them, and what they should expect of themselves.

Whenever Diane’s grandmother sees her sweep the floor or wash the dishes, she acts surprised and wonders what made Diane clean the house. She then asks her granddaughter if she needs money since she rarely sees her do this. She compares her to her siblings who are usually responsible and helpful in the house. The way her grandmother sees her makes Diane feel ashamed of herself and eventually discourages her to do household chores, reinforcing the negative labels given to her.

Life scripts or identity scripts are life rules assigned to us by significant others (i.e., adult family members), which determine the roles that we are to play as individuals. Examples of these scripts include not marrying until one has helped the younger siblings finish school, not entering a relationship before one graduates in college, being a devout Christian, becoming a doctor, living frugally, and so on. These life scripts can be challenged once the individual has learned to decide for himself or herself and realized that these scripts do not correspond to his or her beliefs and goals in life.

Karl was among the best in his class but his father didn’t want him to go to college. His father explained that not one in their family had been to college anyway. As a farmer, he wanted Karl to learn how to till the land as he would soon be the one inheriting this in the future.

The kind of relationship and attachment we have with our parents or caregivers—the earliest of all our personal relationships, determines how we eventually view ourselves and other people, and how we will behave in our future relationships (Bowlby, 1977). There are four kinds of attachment styles: the secure attachment style, the dismissive, the ambivalent, (Hazen & Shaver, 1987) and the fearful (Bartholomew. 1990). 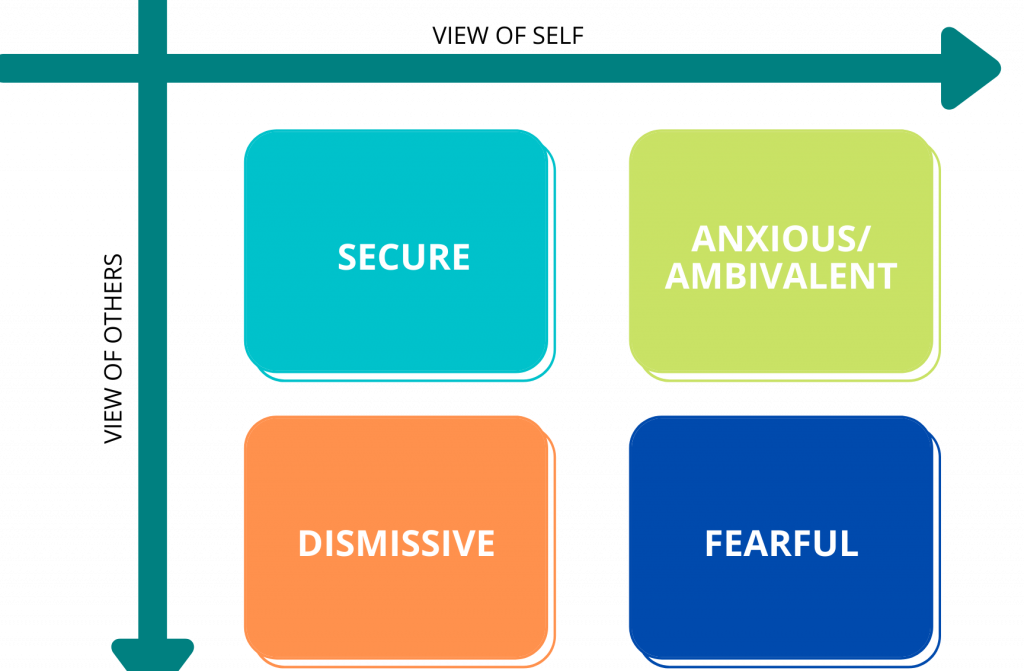 The secure attachment style is demonstrated by being consistent in showing the child that he or she deserves to be loved and cared for. Children raised in this kind of environment develop a high self-esteem and a positive perception of other people.

The fearful attachment style is developed when the parents or caregivers are abusive or rejecting, which lowers the self-esteem of the child. People raised by parents adopting this behavior often develop insecurity and apprehension in entering relationships.

The dismissive attachment style is used by parents who are negligent and indifferent to their children’s needs. Unlike children who developed the fearful attachment style, people who grew up in this environment develop a high self-worth but a negative perception of others. They often refuse to enter relationships, seeing these as unnecessary in life.

Finally, the ambivalent attachment style involves inconsistent behavior, from loving to indifferent and sometimes, even abusive. Children brought up by parents who promote this style are generally anxious and inconsistent in their actions and feelings towards their relationship partners.

Reflected appraisals, a term introduced by Harry Stack Sullivan, pertains to how we evaluate ourselves from the way we think others perceive us. Charles Horton Cooley (1912) explains this with the concept of a “looking-glass self,” in which people determine how the other person perceives and judges them based on the other person’s behavior and attitude towards them.

As children, reflected appraisals from people who are close or important to us such as our parents, teachers, and friends have a significant impact on our self-image. As adults, we learn to identify which appraisals to accept, often rejecting those that differ from what we previously believed of ourselves. For instance, your previous English teachers may have assessed you as a poor speaker and you may have internalized this and accepted it as a fact about yourself. In your future English classes, you may refuse to speak in front of the class in fear, of being laughed at or criticized. Even if later, someone evaluates you as a good English speaker, you may think that person may just have low standards or maybe the topic of conversation was too easy.

While comparing yourself to people is not always constructive, it also influences the development of your self-concept. We are able to define ourselves by recognizing our similarities and differences with other people in terms of age, nationality, social status, abilities, interests, and so on. In addition, we are also able to assess our qualities and abilities in relation to our peers. While some individuals reject the idea of comparing oneself to others, Ron Adler and George Rodman (2006) assert that comparison is natural and necessary to form a realistic self-image. However, they warned about making invalid evaluations by comparing ourselves to people who are not of the same level as us (e.g., comparing one’s body to a supermodel’s). There are two types of comparisons: the criterion-based and the norm-based (Rosenberg, 1979). At school and in competitions, we have been trained not only to measure ourselves based on a criteria (e.g., getting a perfect score on a test) but also based on the norm (e.g., performing better than the rest of the class).

Self-disclosure refers to the process of revealing certain aspects of the self to others. It influences the way others perceive us and reinforces our beliefs about ourselves. When we share our personal interests, beliefs, dreams, or fears to our significant others, we are demonstrating self-disclosure. It is difficult to disclose personal information to others when we expect negative reactions from them. For instance, people tend to hide their true selves to strangers, acquaintances, and professional or academic colleagues. In contrast, we reveal our secrets to our close friends or family as they are more likely to accept us and support our goals.

Joseph Luft and Harrington Ingham (1955) created a model called the Johari Window, which assists individuals in identifying perceptions that affect their self-concept development and personal growth. The window-like model is divided into four panes, which correspond to four different perceptions of the self. These are the open or free area, the blind area, the hidden area, and the unknown area.

The open area represents the information and perceptions of the self which are known to the individual and to other people. For instance. your neighbors or acquaintances would probably know basic information such as your name, age, where you go to school, or what kind of work you have. You may be open about your political views, religious beliefs, or gender status.

The blind area represents perceptions that others possess about us but that we are unaware of. For instance, friends may view us as more or less confident than we think we are. Acquaintances may readily form perceptions about us and judge us as intimidating, overly nice, or too demanding. Teachers, as well as employers, may identify our strengths and weaknesses and recognize hidden potentials that we do not think we have.

The hidden area represents aspects of ourselves that we prefer not to share to others. Normally these include fears and insecurities: however, we may also choose not to reveal positive things about us (e.g., some parents do not talk about their previous accomplishments to their children). Self-disclosure diminishes one’s hidden area.

The unknown area represents the things that we do not know yet about ourselves. For instance, without having experienced the death of a loved one, one may not realize how emotionally strong he or she is. In order to decrease the unknown areas about oneself, it is important to look for new experiences, participate in various activities, or interact with people belonging to different cultures.

The 8 Functions of Communication