The Lesser Gods of Earth

Earth herself was called the All-Mother, but she was not really a divinity. She was never separated from the actual earth and personified. The Goddess of the Corn, DEMETER (CERES), a daughter of Cronus and Rhea, and the God of the Vine, DIONYSUS, also called BACCHUS, were the supreme deities of the earth and of great importance in Greek and Roman mythology. Their stories will be found in the next chapter. The other divinities who lived in the world were comparatively unimportant.

PAN was the chief. He was Hermes’ son; a noisy, merry god, the Homeric Hymn in his honor calls him; but he was part animal too, with a goat’s horns, and goat’s hoofs instead of feet. He was the goatherds’ god, and the shepherds’ god, and also the gay companion of the woodland nymphs when they danced. All wild places were his home, thickets and forests and mountains, but best of all he loved Arcady, where he was born. He was a wonderful musician. Upon his pipes of reed he played melodies as sweet as the nightingale’s song. He was always in love with one nymph or another, but always rejected because of his ugliness.

Sounds heard in a wilderness at night by the trembling traveler were supposed to be made by him, so that it is easy to see how the expression “panic” fear arose.

SILENUS was sometimes said to be Pan’s son; sometimes his brother, a son of Hermes. He was a jovial fat old man who usually rode an ass because he was too drunk to walk. He is associated with Bacchus as well as with Pan; he taught him when the Wine-god was young, and, as is shown by his perpetual drunkenness, after being his tutor he became his devoted follower.

Besides these gods of the earth there was a very famous and very popular pair of brothers, CASTOR and POLLUX (Polydeuces), who in most of the accounts were said to live half of their time on earth and half in heaven.

They were the sons of LEDA, and are usually represented as being gods, the special protectors of sailors,

Saviors of swift-going ships when the storm winds rage
Over the ruthless sea.

They were also powerful to save in battle. They were especially honored in Rome, where they were worshiped as

The great Twin Brethren to whom all Dorians pray.

But the accounts of them are contradictory. Sometimes Pollux alone is held to be divine, and Castor a mortal who won a kind of half-and-half immortality merely because of his brother’s love.

LEDA was the wife of King Tyndareus of Sparta, and the usual story is that she bore two mortal children to him, Castor and Clytemnestra, Agamemnon’s wife; and to Zeus, who visited her in the form of a swan, two others who were immortal, Pollux and Helen, the heroine of Troy. Nevertheless, both brothers, Castor and Pollux, were often called “sons of Zeus”; indeed, the Greek name they are best known by, the Dioscouri, means “the striplings of Zeus.” On the other hand, they were also called “sons of Tyndareus,” the Tyndaridae.

They are always represented as living just before the Trojan War, at the same time as Theseus and Jason and Atalanta. They took part in the Calydonian boar-hunt; they went on the Quest of the Golden Fleece; and they rescued Helen when Theseus carried her off. But in all the stories they play an unimportant part except in the account of Castor’s death, when Pollux proved his brotherly devotion.

The two went, we are not told why, to the land of some cattle owners, Idas and Lynceus. There, Pindar says, Idas, made angry in some way about his oxen, stabbed and killed Castor. Other writers say the cause of the dispute was the two daughters of the king of the country, Leucippus. Pollux stabbed Lynceus, and Zeus struck Idas with his thunderbolt. But Castor was dead and Pollux was inconsolable. He prayed to die also, and Zeus in pity allowed him to share his life with his brother, to live,

Half of thy time beneath the earth and half
Within the golden homes of heaven.

According to this version the two were never separated again. One day they dwelt in Hades, the next in Olympus, always together.

The late Greek writer Lucian gives another version, in which their dwelling places are heaven and earth; and when Pollux goes to one, Castor goes to the other, so that they are never with each other. In Lucian’s little satire, Apollo asks Hermes: “I say, why do we never see Castor and Pollux at the same time?”

“Well,” Hermes replies, “they are so fond of each other that when fate decreed one of them must die and only one be immortal, they decided to share immortality between them.

“Not very wise, Hermes. What proper employment can they engage in, that way? I foretell the future; Aesculapius cures diseases; you are a good messenger—but these two—are they to idle away their whole time?”

“No, surely. They’re in Poseidon’s service. Their business is to save any ship in distress.”
“Ah, now you say something. I’m delighted they’re in such a good business.”
Two stars were supposed to be theirs: the Gemini, the Twins.

They were always represented as riding splendid snow-white horses, but Homer distinguishes Castor above Pollux for horsemanship. He calls the two

Castor, tamer of horses, Polydeuces, good as a boxer.

THE SILENI were creatures part man and part horse. They walked on two legs, not four, but they often had horses’ hoofs instead of feet, sometimes horses’ ears, and always horses’ tails. There are no stories about them, but they are often seen on Greek vases.

THE SATYRS, like Pan, were goat-men, and like him they had their home in the wild places of the earth.

In contrast to these unhuman, ugly gods the goddesses of the woodland were all lovely maiden forms, the OREADS, nymphs of the mountains, and the Dryads, sometimes called HAMADRYADS, nymphs of trees, whose life was in each case bound up with that of her tree.

AEOLUS, King of the Winds, also lived on the earth. An island, Aeolia, was his home. Accurately he was only regent of the Winds, viceroy of the gods. The four chief Winds were BOREAS, the North Wind, in Latin AQUILO; ZEPHYR, the West Wind, which had a second Latin name, Favonius; Notus, the South Wind, also called in Latin AUSTER; and the East Wind, EURUS, the same in both Greek and Latin.

There were some beings, neither human nor divine, who had their home on the earth. Prominent among them were:—

THE CENTAURS. They were half man, half horse, and for the most part they were savage creatures, more like beasts than men. One of them, however, CHIRON, was known everywhere for his goodness and his wisdom.

THE GORGONS were also earth-dwellers. There were three, and two of them were immortal. They were dragonlike creatures with wings, whose look turned men to stone. Phorcys, son of the Sea and the Earth, was their father. 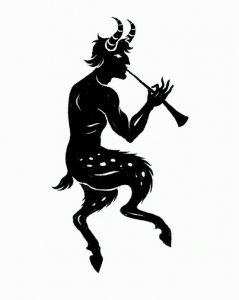 THE GRAIAE were their sisters, three gray women who had but one eye between them. They lived on the farther bank of Ocean.

THE SIRENS lived on an island in the Sea. They had enchanting voices and their singing lured sailors to their death. It was not known what they looked like, for no one who saw them ever returned.

Very important but assigned to no abode whether in heaven or on the earth were THE FATES, Moirae in Greek, Parcae in Latin, who, Hesiod says, give to men at birth evil and good to have. They were three, Clotho, the Spinner, who spun the thread of life; Lachesis, the Disposer of Lots, who assigned to each man his destiny; Atropos, she who could not be turned, who carried “the abhorrèd shears” and cut the thread at death.