In the beginning was Chaos, an open chasm of emptiness – infinitely deep, dark, and silent. In his vision of the universe’s origin, set down in Theogony, the Greek poet Hesiod saw creation as the imposition of a positive reality on this negativity and absence. Key to that reality was the capacity for change. The nothingness of Chaos could have continued, eternally unaltered, but existence, once created, brought with it endless cycles – the comings and goings of the seasons, generations of humans, birth, and death. These cycles were set in motion by the making of the original division between night and day; time was now measurable and meaningful. 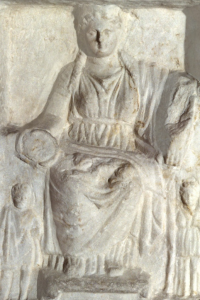 The first Greek goddess, Gaia, was the earth in its mineral form – its rocks and soils, its mountains and its plains. From its solid and seemingly inert state, it became. vibrant with the potential for new life. The first manifestation of that new vitality was Ouranos, god of the sky, spontaneously conceived within the womb of the great Earth Mother Gaia, with whom he would subsequently father children.

Though Gaia’s son, Ouranos was her equal. Hesiod wrote that she bore him specifically so that he could “cover her”. While this was a statement of fact – the sky being above the earth – it adds more than a hint of sexuality to the relationship between the earth and heaven. In real life, the Greeks were as horrified at the idea of incest as we are. Its function in their mythology appears to have been to show that all the different aspects of existence are intensely conflicted, yet intimately linked. The sky was not simply positioned above the earth; it conjoined with it dynamically and, ultimately, creatively, just as night did with day, darkness with light, and death with life.

While creative, these conjunctions inevitably cast opposing principles into a never-ending struggle for supremacy. Hesiod’s portrayal of primal sexual relations was essentially violent; male and female forces as complementary but also competing. It was far from an idealized world view, and the depiction of Ouranos was even more extreme; the despotic patriarch would brook no rival – not even his own children.

Ouranos’s jealousy of his sons and daughters was such that, at each birth, he took them away and stowed each one in some hidden recess of the earth – which was actually his wife’s body. He did this to establish his ownership of Gaia. Her sexual attentions had to be entirely and eternally available to him, so their offspring could not be allowed to see the light of day. Successive infants were consigned to subterranean depths.

First came the 12 Titans – the sisters Theia, Mnemosyne, Phoebe, Themis, Tethys, and Rhea, and their brothers Oceanus, Coeus, Crius, Hyperion, Iapetus, and Kronos. Each in his or her turn was rammed into some convenient crack or crevice of the earth and left there, trapped. After the Titans came three giant brothers, the Kyklopes, each of whom had a single eye at the centre of his forehead. Like their siblings, they were consigned at birth to be buried in the heart of the earth. Then came three more giants of even greater strength– the Hecatoncheires, whose name means “hundred- handed” in Greek. Each was also said to have 50 heads, making them formidable – they too were incarcerated by Ouranos deep inside the earth.

As for Gaia, the Earth Mother felt both physically burdened by the number of infant bodies literally forced back inside her and also deeply upset by the attempted suppression of her children. Finally, she rebelled and appealed to her sons for help. She secretly made a sickle out of adamant – by legend an unbreakable mineral – and gave it to Kronos. The next time Ouranos spread himself over her, attempting to force her into intercourse, Kronos leapt out from his hiding-place to aid his mother. Wielding his sickle, and with one fell swoop, he sliced off his father’s genitals.

It was the ultimate patriarchal nightmare – the father not just supplanted by his son but castrated by him, with the connivance of his wife. Even now, however, Ouranos’s potency was not quite spent. The splashes of blood and semen that flew from his wound sowed spirit life wherever they landed, bringing into being a vast assortment of new-born nymphs and giants, good and bad. The Erinyes, three baleful sisters better known to us now as the Furies, were angry and avenging spirits. Aphrodite was a deity of a very different kind. Where Ouranos’s wound-spatter landed in the ocean, this most beautiful of goddesses was born. She stepped from the waves, bringing with her all the delights of erotic love.

Titans of all trades

When Kronos had finally freed his brothers and sisters from captivity in the earth, the Titans were to serve a twofold mythic function. First, they were living, breathing, loving, and fighting personalities. Each of them symbolized a different aspect of existence, so that collectively they represented a way of ordering and enriching the world. The eldest daughter Mnemosyne, for instance, stood for the faculty of memory and all it brought with it in terms of history, culture, and heritage. Later, having lain with her nephew Zeus, she would give birth to the nine Muses – divine patronesses of scientific study, historical study, poetry, and the performing arts.

Tethys, who married her brother Oceanus, went on to bear him 3,000 sons – all river gods – and as many daughters, the Oceanids, who were nymphs of springs, rivers, lakes, and seas. Her younger sister Theia, too, took a brother, Hyperion, for her husband; she bore him Helios, the sun, and his sister Eos, goddess of dawn. Helios and Eos had a sister, Selene, who was a goddess of the moon, though her aunt Phoebe – sister to Tethys, Mnemosyne, and Theia – also had lunar associations.

Themis, the youngest female Titan, was associated with reason, justice, and with the orderly conduct of existence in the universe. Like her sister Mnemosyne, she would for a time become consort to her nephew Zeus. Of their children, the Horae (“Hours”) would oversee the measurement and passage of the seasons and of time. Another daughter, Nemesis, took her mother’s association with justice to violent extremes; as her name suggests, she became notorious as the personification of punishment and divine retribution.

The name of the youngest male Titan, Iapetus, comes from iapto, a Greek word meaning “wound” or “pierce”. The implications of this translation have long been debated. Ancient poets seem to have been unsure whether he was given this name because he sustained an injury or because he made the weapon that inflicted it. Meanwhile, in classical literature, Iapetus appears both as a deity of mortality and of skill in crafts.

Artists in ancient Greece almost invariably represented Kronos carrying a sickle – an emblem of his attack upon his father. The sickle also has more mundane and practical associations. Kronos came to be seen as the godly guarantor of a successful harvest. The connection between these two functions – the idea that one generation had effectively to be destroyed for its successor to survive and thrive, took an early hold on the Greek consciousness.

Kronos, having killed his father, now replaced him as the head of the household: he then married his sister Rhea and began to produce children of his own. Much like his father, Kronos would soon confront the idea that human life can only advance through intergenerational struggle. This theme runs through the Greek mythological tradition, and is most notoriously associated with the story of King Oedipus.