What is Contemporary Art?

It is a common tendency to describe the present as “modern.” Being modern means being up to date and technologically advanced. Often, being modern is equated with being contemporary. Art that is new or current is also often referred to as “modern” as opposed to “traditional” or “conservative.” In other words, in everyday parlance, the terms are interchangeable.

In this lesson and in the more detailed history in the next, we will learn that the terms modern and contemporary refer to vastly different periods. Modern Art is not the same as Contemporary Art, although they could share some characteristics, sources and influences. As we will come to realize and learn as we go along, it is also possible to integrate and transform elements from Modern Art into Contemporary Art.

What is contemporary? Is it the same as being modern?

The first difference between the contemporary and modern is historical and chronological, as the overview of Philippine Art in Lesson 2 will show. Meanwhile, the table suggested by Arts Studies Professors Fajardo and Flores titled “Historical Overview of Philippine Art” (2002) shows a summary of the periods of Philippine Art from Pre-Conquest to the Contemporary. Please take note that this table includes painting, sculpture, and architecture only. As you learn more in succeeding lessons, you can add on your own data on the other arts Pike music, dance, literature, and theater. 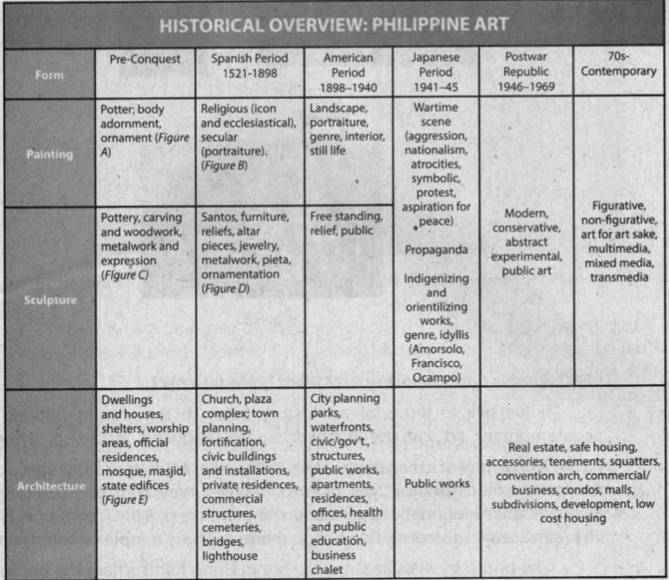 What is Contemporary Art? What is Modern Art?

If we talk in terms of art history (refer to the aforementioned matrix), contemporary art can be defined as art produced by artists living today.

The picture of a man on the stairs by Xyza Bacani and the painting by HR Ocampo have the same subject matter: the poor and ordinary people on the streets.

The photo by Xyza Bacani was shot in Hong Kong where the photographer, who hails from Nueva Vizcaya, worked as a domestic helper. She used photography to raise awareness about migrant workers and human rights issues.

HR Ocampo’s painting was painted in the early 1960s. At that time, the painting was considered contemporary. Today, we refer to these works as examples of Modern Art, produced between the American colonial period to the Post-war period. Some Modern artists continue to produce work till today. In that sense, their works can be described as contemporary, by virtue of being “of the present.” For example, the National Artist Arturo Luz continued to produce paintings in his 90s and well into the 21st. However, the table of “Historical Overview” his paintings’ hard-edged and minimalist abstract style is associated with the Modern style of the late 20th century. The “contemporary” is therefore a fluid term, and its use can change depending on the contexts, in this case historical and stylistic. At times, the Modern and Contemporary can be used simultaneously or interchangeably; however, there is also danger of using them carelessly or loosely. Thus, it is important to know the historical, and stylistic contexts of the terms.

There are a number of artists—young and senior, alike—who paint in styles associated with Modern Art. National Artist Victorio Edades is credited for initiating the Modern Art movement that challenged the Neoclassic style, which was dominant at the time he came home from studying in America before the war. The Neoclassic style depicts reality as closely as possible and idealizes it. The Modern artists led by Edades challenged what were described as “conservative” art seen in the works of National Artists Fernando Amorsolo and Guillermo Tolentino. Modern artists do not aim to copy and idealize reality; instead, they change the colors and flatten the picture instead of creating illusions of depth, nearness, and farness. Instead of the beautiful and pastoral, they depict what might be thought of as “ugly” and unpleasant.

At that time, Modern Art was considered new and shocking; Neoclassic Art was familiar and comfortable. Neoclassic Art is also described by art historians like Guillermo as “academic” along with other established styles imported from Europe via Spanish colonization. In its simplest sense Neoclassicism is “academic” as it was and continues to be taught in schools, particularly the then University of the Philippines School of Fine Arts (now UP College of Fine Arts), where Amorsolo and Tolentino were most influential. The School of Fine Arts is now the University of the Philippines College of Fine Arts, where students are being exposed to various styles. The Neoclassic style associated with Amorsolo and Tolentino continue to influence a number of practicing artists who have learned to paint in that style either formally as art students in various universities where Neoclassic style is included in the curriculum or informally through workshops and apprenticeships, or through self-learning or self-study, as in the case of many artists from the regions outside Manila.

What are the similarities and differences between Modern Art and Contemporary Art?

First photo shows Carlos Francisco’s depiction of fishing as a difficult process, while Amorsolo’s rendition emphasizes cairn and placidity. Like Francisco’s Magpupukot (1957), HR Ocampo’s The Contrast (1940), Cesar Legaspi’s Frugal Meal (undated), Edades’s The Builders (1928) shows the oppressive condition of the underprivileged classes. As we shall learn in the historical overview in the next lesson, Modern Artists like Romeo Tabuena, Hernando Ocampo, Vicente Manansala, Victor Oteyza, Ramon Estella and Cesar Legaspi were actively depicting the social conditions in the aftermath of World War II. Called Neo-Realists by critic Aguilar Cruz, these artists depicted society’s problems and challenged the Neoclassic rural-pastoral style associated with Amorsolo and Tolentino. The Social Realists of the -seventies are considered heirs of this tradition.

Social Realism continues to influence contemporary artists. For example, Imelda Cajipe-Endaya’s Filipina DH (1995) is social realist, but the style and medium of the installation is markedly different. Refer to “The Stylistic Overview” table for an idea of the difference in style and medium between Modern Art and Contemporary Art.